Sprint Car Insider – Driver Exclusive. FRESNO, Calif. (September 28, 2018) – Corey Day is finally clicking off Restricted wins like so many predicted him to at the beginning of the season.

After picking up the Restricted Class Tulsa Shootout Championship, the Dixon Speedway opener and the first round of the King of California series, Corey Day wouldn’t see victory lane again until August. Despite not claiming the top spot during that period he still had one of the most consistent overall series performances of anyone. With King of California the top priority to Day he scored top 5 points in all but one round out of fourteen so far. His consistency has built himself a superior advantage and he finds himself in place to lock up that title next weekend.

As for the task at hand since August Day has been on a complete terror. With four wins since the month of August began, including the Mark Hagopian Memorial, a King of California weekend sweep, and the last victory at Lemoore Raceway. Once again it’s Lemoore Raceway set to play host to their final points round and there is a pretty intense title fight taking place. Day would love to play the role of spoiler. Having found victory lane at Lemoore Raceway for the first time since the 2017 Cal Cup Day looks to keep another streak alive and let the title combatants battle it out, for second.

As far as points are concerned Day still has a mathematical possibility to lock up 3rd in points as he sits just 3 points out of fourth place Eli Bookout, and 17 points away from third, Katey Syra. Day now also boast a win total of six races and would love to expand on that total as the season draws to a close.

Catch Corey Day in action next this weekend at – 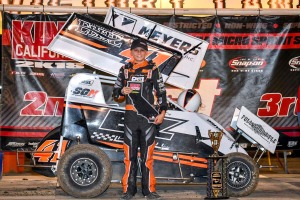 Feel Free to give a ring or shoot an email anytime – Contact: jerrycoxmedia@gmail.com

On Deck for Corey Day

Make sure to follow us for the latest in breaking developments and up to the minute updates on all of your favorite drivers:

My Tweets
Sprint Car Insider Day on a Roll__ Corey Day steamrolling through late season
%d bloggers like this: