Sprint Car Insider – Driver Exclusive. CONCORD, Ca. (October 10, 2018) – Joey Ancona picked up his second title of 2018 in less than a week and became the first Super 600 King of all four California tracks after Friday Nights penultimate Round at Dixon Speedway.

With two King of California wins to his credit as well as twelves top 5 point paying finishes Joey Ancona wrapped up the 2018 King of California Micro Sprint title a whole round early. Having an insurmountable points lead and Championship locked up, the Ancona family decided to take the next step forward in Joey’s career rather than finish out the micro sprint series.

Saturday night October 6, 2018, will be a day Joey Ancona, his family, and the Sprint Car Community will long remember. Although he’s run a 305 in the 360 class at Antioch Speedway, Saturday night was the first time Ancona would contest in his own Dryco Construction 88a, CS9 chassis, 360 sprint car. Ancona may only be the fresh young age of 14 but he’s already earned multiple championships across several forms of racing. With two more titles under his belt in just his second year of contesting in the Super 600 (Outlaw Class) division of micro sprint racing the call of natural progression has elevated him to Sprint Car racing.

First, in his last race as a full-time micro sprint racer, he would have to tackle round 15 of the KofC series at Dixon Speedway to wrap up the title. He was able to do just that. After starting 9th in the main Ancona was able to move forward through the field and land a much-needed top 10. Ancona was able to keep his title rival within sight which was all he needed to do to seal the deal. The points were calculated and Ancona had officially obtained a margin that mathematically could not be beaten.

Joey Ancona was officially crowned the 2018 King of California Super 600 champion and that would wrap up his full-time Micro Sprint Career.

Saturday night the Ancona family packed up and headed to Antioch Speedway with crew chief Steve Hamblin to officially begin their Sprint Car career. According to Joe Ancona, Joey’s father, he was smooth, comfortable, and felt right at home.

“This is a whole new learning curve,” said Joe. “But he loved it, he absolutely loved it.”

Ancona’s Results would prove that sentiment to be true. According to Joe, the track was really tricky in turns three and four catching many drivers off guard but Joey Adapted well. Joey was able to move forward and bring the car home in one piece.

A fourth-place finish in his heat put Joey in the 10th starting position to begin the main event. Much to Joe’s surprise Joey really wanted to free up the car because it was pushing hard and it would be the right adjustment. Joey started from tenth and drove his way all the way up to the 4th position.

It was a solid run for Joey Ancona in his, Dryco 88a, 360 sprint car for the first time. On the calendar next the Ancona team is set to take on Keller Auto Speedway (Kings Speedway) for the 33rd Annual Cotton Classic. The goal of the team is to just go out, run some laps, and become acclimated to a much bigger, new track. They have no expectations other than to gain seat time. 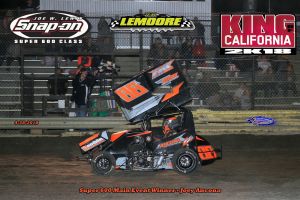 Make sure to follow Sprint Car Insider on Facebook, @SCI_updates on twitter or visit our website – sprintcarInsider.co for or all of the updates on Joey Ancona as he continues his assault on the 2018 campaign.

Or Follow Joey Ancona and his/her racing personally at

Catch Joey Ancona in action this next at –

On the Horizon for (DRIVER NAME):