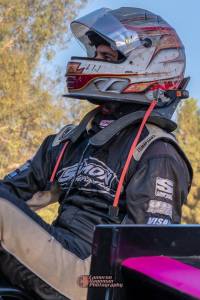 Win more than half the races entered – checkmate.

The next one on his list was one he had yet to obtain in his entire career – a championship from Delta Speedway.

Having already been crowned champion of the King of California series did not stop Smith from putting the exclamation point on his season. Smith swept round 15 at Dixon Speedway with quick time, a heat win, and main Event win number 23 on the season.

If he had yet to be crowned King of California that surely would have sealed the deal but he wasn’t done. As stated in last weeks pre race report career first are few and far between for Smith but when they do come around, he stops at nothing to check another box.

Before this weekend Tyler Smith had never been a Delta Speedway champion. Conflicting schedules had always gotten in the way but this year the opportunity presented itself. Going after the championship on the 1/7th-mile bullring at the San Joaquin County Fairgrounds would prove to be his closest contender title of the year but in the end, he would prevail yet again.

The points were close all year and rolling into Delta his fifth title sat there on the line. This spelled trouble for other drivers seeking to add their name to the win column thinking they had a chance because Smith already wrapped up the King of California. No such chance would present itself. 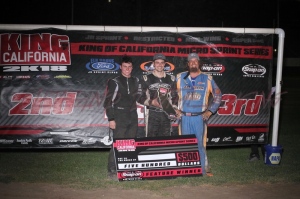 On top of the Delta title, Smith had the opportunity to earn double digit wins in King of California denying any other driver multiple wins in the class. He once again set quick time, went through his heat and started in prime position for the main. The final points paying main Event victory of the season at Delta didn’t come without challenges however.

One driver who had the opportunity to earn that coveted second victory in KofC competition presented a fierce challenge. In fact, he may have been a little quicker in the main according to the stopwatch. But the mental game and veteran savvy of Tyler Smith could not be dismantled.

Smith overcame the challenge and drove to another weekend sweep marking his 24th victory, 10th King of California, and most notably, his first Delta Speedway Championship, and 5th title of the year.

Saying that Tyler Smith had a remarkable season would be an understatement but if you think he hasn’t got anything to race for you’d be sadly mistaken.

Up next Tyler looks to break his season-high win total of 25.

Personal history is on the line. Watch Smith attempt to break his own record this weekend at the California Cup at Lemoore Raceway, and in two weeks from Turkey Bowl XVIII at Delta Speedway and the last race of the year at the Lonnie Kaiser Memorial at Dixon Speedway.

Catch Tyler Smith in action this next at –

Make sure to follow Sprint Car Insider on Facebook, @SCI_updates on twitter or visit our website – sprintcarInsider.co for or all of the updates on Tyler Smith as he continues his assault on the 2018 campaign.

On the Horizon for Tyler Smith