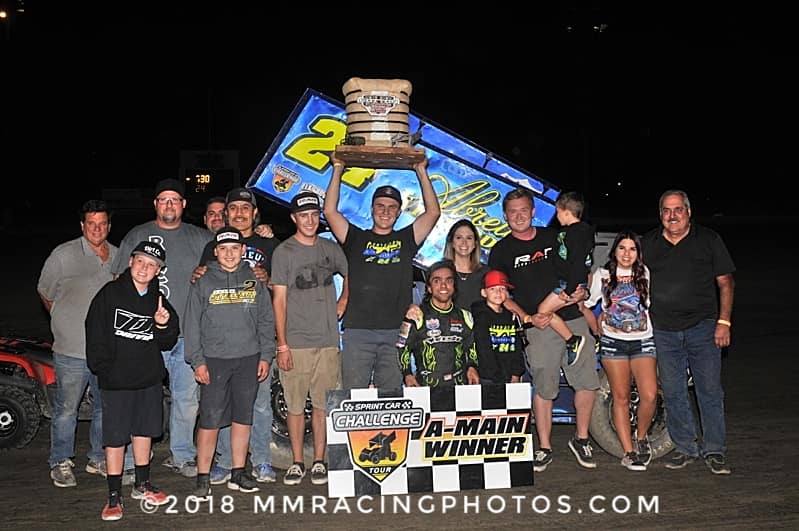 Four-time Stockton Dirt Track winner Rico Abreu looks to add more this weekend. The two-time Chili Bowl Nationals champion will be pulling double-duty on Saturday November 3rd, along with running Friday November 2nd. Abreu has claimed the Winged 410 Sprint Car portion of the Tribute to Gary Patterson twice before and snagged the 360 portion in 2014.

Abreu raced to victory during the most recent Sprint Car Challenge Tour presented by Elk Grove Ford and Abreu Vineyards event held at Keller Auto Speedway on October 13. The always exciting driver has also claimed a pair of World of Outlaws victories this season, including the 65th annual Gold Cup Race of Champions in September at Silver Dollar Speedway.

The highlight of the double header this weekend is the 35th running of the Tribute to GP this Saturday, which features championship night for the King of the West-NARC Fujitsu 410 Sprint Car Series and the Sprint Car Challenge Tour presented by Elk Grove Ford and Abreu Vineyards. Each series champion will be crowned in the unique Stockton Dirt Track winner’s circle, where fans are invited to gather around and enjoy the ceremonies.

The overall weekend opens on Friday November 2nd with championship night for the C&H Veteran Ent. presents Hunt Magnetos Wingless Tour, along with Dwarf Cars and for the first time ever Winged 360 Sprint Cars. The non-sanctioned show will pay a standard Sprint Car Challenge Tour purse of $2,500-to-win/ $400-to-start the A-main. It will be a perfect tune-up before Saturday’s $5,500-to-win SCCT finale. The Winged 360’s will be following Sprint Car Challenge tech rules. There is no muffler rule either night.

The King of the West-NARC Fujitsu 410 Sprint Car main event on Saturday will be $4,000-to-win/ $650-to-start thanks to extra money from HydroChemPSC.

Both Dashes on Saturday will be a minimum of $1,000-to-win thanks to SunnyValley Bacon and the San Joaquin Asparagus Festival. The $1,100 Double Duty Challenge Bounty is also still up for grabs to any driver that can win both A-mains on Saturday.

All seating on Friday November 2nd is general admission, while Saturday November 3rd features reserved seating in the upper deck. The front gate and ticket booth opens at 4pm on Friday, with racing at 6pm. On Saturday will call and ticket booth opens at 2pm, with the front gate opening at 3pm. Cars will hit the speedway at 4:30pm for wheel packing with hot laps, qualifying and racing to follow. Tickets can be pre-purchased at https://noceti-group.ticketleap.com/

During the races on Saturday November 3rd the Stockton Dirt Track will be hosting a “Legends of Sprint Car racing” autograph session from 4pm-6 to help commemorate the 35th running of the Tribute to Gary Patterson.

Those that are set to take part include Johnny Anderson, Jimmy Sills, the Kaeding family, Wally Baker, the Tiner family, LeRoy Van Conett, Richard Forsberg, the Bradway family, Rick Hirst and Jimmy Gordon’s son Jim Gordon. The autograph session will take place in the grandstands and each signee will have custom autograph cards to hand out for the fans. The hope is to expand upon it in the years to come at the Tribute to GP.

Known as the “Dancing Phantom from Stockton,” the “Preacher,” the “Hostile Hippie” or just simply “GP,” Gary Patterson was one of the most colorful characters of his time and captured several major wins in his career, including the Gold Cup Race of Champions, the Super Dirt Cup in Washington and the Turkey Night Grand Prix at Ascot Park among others.

Patterson lost his life in a Sprint Car crash at Calistoga Speedway on Memorial Day weekend 1983 and an event in his memory has been held every year since. “GP” moved to Stockton, California in 1957 and began his career at the Stockton 99 Speedway. This year marks the sixth season in a row that we’ve paid honor to Patterson in Stockton.

The Stockton Dirt Track is located on the San Joaquin County Fairgrounds in Stockton, California at 1658 S Airport Way, Stockton, CA 95206. More info can be found at www.stocktondirttrack.com 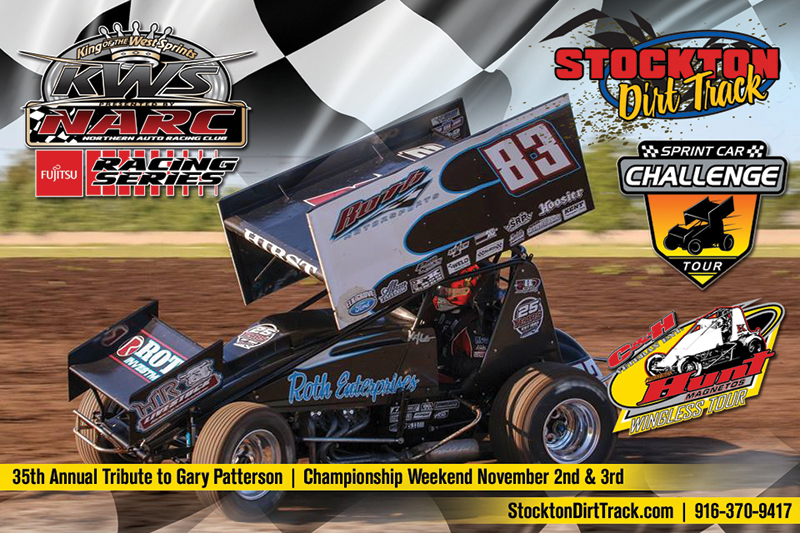