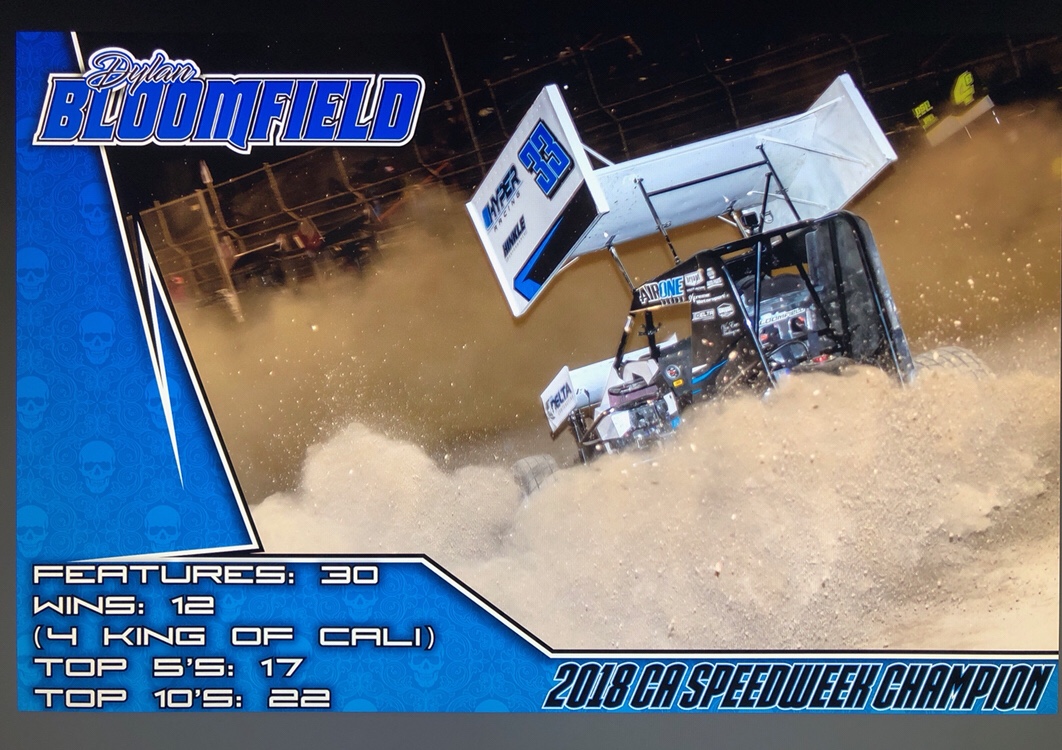 Sprint Car Insider- Driver Exclusive. DISCOVERY BAY, Ca. (December 6, 2018) – Dylan Bloomfield’s results in 2018 may have come as a surprise to many, but not Dylan Bloomfield.

In fact, the results they obtained in 2018 were nothing less than expected. Last year Dylan put in a solid rookie campaign but when 2018 rolled around the Bloomfield’s had their eyes set on winning, and winning a lot.

That’s exactly what they did, win.

After picking up 13 wins in 30 races and dominating California Speedweek it’s safe to say Dylan Bloomfield has arrived.

Bloomfield burst on to the scene in 2018 and found success early and often. Dylan Bloomfield can no longer fly under the radar, he’s now a full-fledged established contender. Coming into the 2018 season many people around the local industry questioned the Bloomfield’s decision to go with Hyper Chassis. The grumbling was loud, some doubted them, others blatantly called them fools, but Dylan Bloomfield nipped all of that in bud real quick by dropping everyone’s jaws.

Right out of the gate he landed on the podium at Round one of the King of California series. But hey anyone can be lucky right? A fourth place at round two began to grab everyone’s attention but the questions still remained. The next weekend is where the questions would get their answer. He brought home a third at Round three but when the series shifted to round four the lights came on.

Round 4 of the King of California shifted to Lemoore Raceway and the landscape of contenders shifted with it. Young Bloomfield waited for his opportunity before he pounced, seizing his opportunity. Bloomfield drove the Airone, 33-Motorsports, Hyper Chassis to the front and proceeded to dominate. Just four races into the season and the questions were answered – Bloomfield was going to be a threat.

He backed up that sentiment further at the next King of California race where he became the first back to back winner of the series. From that point forward Bloomfield confirmed within himself that the front was where he belonged and the winning wagon just kept on rollin.

Just one short month into the season aboard his Hyper Chassis Dylan Bloomfield already had two King of California victories to his credit and sat right within the thick of the title chase. Just before Speedweek Bloomfield picked up his third win of the season and first at Delta Speedway on June 15. Little did anyone know but the three wins Bloomfield had already put up would serve as a foreshadowing of what was yet to come.

California Speedweek is where the legend of Dylan Bloomfield was born.

It all began with some light hearted photos getting ready for the big week where Dylan calls his shot and says he’s ready to go bear hunting. As innocent as this seemed, no one knew just how serious he was.

The bear hunting began night one at Dixon Speedway.

No matter who had their eyes on Bloomfield, or who predicted them to be contenders, it was apparent that it didn’t matter. They knew what they were capable of and they went out and executed. Bloomfield drove through the pack en route to a display of dominance to tag out his first bear of hunting season at Round 1.

In accordance with the theme many around the pits chalked it up to a good night. That was only until night two.

Bloomfield seriously dominated the show at Delta Speedway. Just like that after two nights Bloomfield pretty much controlled his own destiny going into the final two rounds.

Round three at Plaza Park once again saw the 33 in contention for the win before he settled for third. In line with a true racer however, Bloomfield could not get over the fact that he could have pushed the window further and went for the win. As the four race affair sat going into the finale Bloomfield logged scores of 1,1,3, to put himself in prime position to grab the title.

Back to Lemoore Raceway, the sight of his first success of the season, for the grand finale, and no sign of nerves could be sensed by the young man. Dylan Bloomfield was calm, cool, and collected as he waited to execute the task at hand – finish bear hunting season with the big one.

Bloomfield put together as close to a perfect night as imaginable with all the pressure on the line. He wound up doing everything he needed to do to bring home that big bear.

The crowing moment in victory lane established without a doubt Dylan Bloomfield’s status amoungst his competition as another of the Nations best. He beat a Shootout champion, and a two-time Clay Cup Champion, in such a way that he too cemented his name as a categorical champion.

There was no more doubting Dylan Bloomfield.

Although what most didn’t know is they had this in mind. Behind closed doors and away from the public light of social media the Bloomfield family had been putting in the work from all angles to achieve such a feat, and it it paid dividends.

From that point forward Bloomfield was all-in on racking up victories. Small issues kept him out of title contention in the other series so he turned his focus to capturing his five Delta Speedway wins, two Dixon Speedway wins, two Lemoore Raceway wins, and most coveted victory at Plaza Park.

At the end of the 2018 Dylan Bloomfield could call himself a winner on every track in the state as well as a major champion. When it was all said and done Bloomfield boasts a 40% win record, 56% top-5 average, and 73% top-ten average.

While many questioned the Bloomfield family and the decisions they made coming into the season they never doubted themselves. They built a plan, laid a foundation, and executed.

As they say the proof is in the pudding. 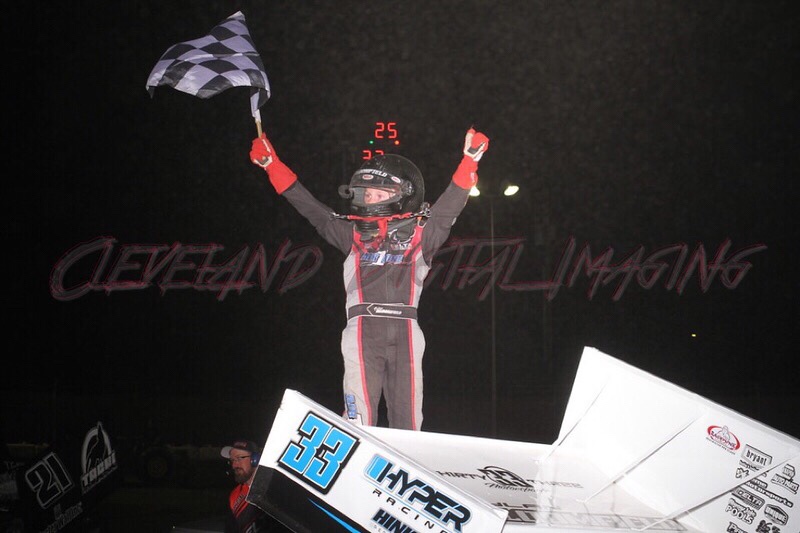 See Dylan Bloomfield in action next at:

Make sure to follow Sprint Car Insider on Facebook, @SCI_updates on twitter or visit our website – sprintcarInsider.co for or all of the updates on Dylan Bloomfield as begins his quest for the coveted Golden Driller

Be sure to Follow Dylan Bloomfield and his racing personally at

See Dylan in action next at:

My Tweets
Sprint Car Insider Dylan Bloomfield- 2018 Year in Review – Emergence of a Contender
%d bloggers like this: