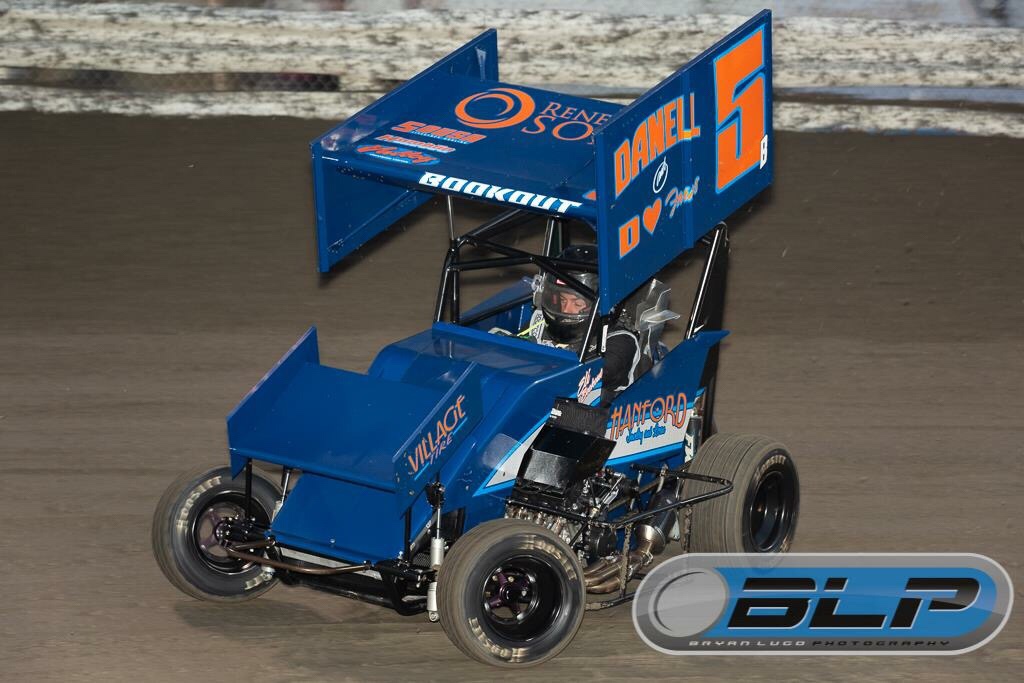 Sprint Car Insider- Driver Exclusive. HANFORD, Ca. (December 17, 2018) — Coming into the 2018 season the Bookout brothers had a lot to look forward to as they hung their hats on the previous seasons accomplishments.

Eli Bookout won his first career Restricted race at Turkey Night at Plaza in last November. It was the last race in the state of California before the off season started, and he did it against all of the same contenders, in convincing fashion.

Wyatt Bookout came into 2018 as Restricted Class rookie on the heels of a Tulsa Shootout runner up finish in the Jr. Sprint class, and a track Championship at his home track of Lemoore Raceway. Although Wyatt wouldn’t completely put the Jr. Sprint away in 2018, the 600 transition would be the primary focus of the season. Wyatt went on to turn some head through the year, and make a fast name for himself, but the learning curve is something every driver has to overcome.

Their 2018 seasons would both see their highs and lows. Eli’s claim to fame would be his top level charges all season, standout pressure packed performances, and attitude through many trying moments. Wyatt’s season was highlighted by his raw speed, final Jr Sprint bouts, and of course, finding a way to be the Riot. In the end, Wyatt would walk away as the 2018 Lemoore Raceway rookie of the year.

It all began back in April for the beginning of the King of California series. As a last minute entrant, Eli Bookout made the trek up thanks to Steve Hamblin and Hamblin Motorsports. According to the Bookout team they couldn’t be where they are today without the gracious, and wonderful assistance of Hamblin Motorsports. Although he almost didn’t make it, Eli Bookout made the decision to race Round One at Dixon an obvious good choice.. He started near the rear of the field, and charged his way up to a podium finish. In a class loaded with Shootout winners, Clay cup champs, and Speedweek legends, Bookout’s Performance was stand out, and spectacular.

The next weekend marked the first race of the year on the home tracks, Plaza on Friday’s and Lemoore on Saturday’s. Night one at Plaza did not go as planned for Eli but brother Wyatt started his practice runs by running three Jr Sprint races, Just at Plaza, in preparation for the Clay Cup Nationals. In all three races he wound up 2nd.

The very next weekend during another King of California series swing to Plaza, Eli scored his first top Plaza Park top 10 of the season. The next night at Lemoore Wyatt showed serious speed by qualifying 6th quick in just his third career Restricted race. Meanwhile, Eli continued to get faster with a pit of third quick the next race weekend at Plaza and Lemoore followed by another top-5 at Lemoore on May 12. Wyatt the Riot earned his way into his first Restricted main event at Lemoore Raceway on this night and came home 19th.

The following summer stretch had its own share of ups and downs. Eli put himself in good position in the King of California series early with solid finishes. The second KofC weekend up north was no different when he scored yet another top 5 at Delta. Up next for the boys was Lemoore’s Tachi Palace Nationals. Eli wouldn’t finish outside of the top 10 all weekend. Wyatt? on the other, qualified in the top 10 all weekend but main event results were still gaining momentum.

As the Clay Cup drew nearer both boys seized momentum. Eli landed a top-5 at the Budweiser -Outlaw -Nationals, night two, at Plaza, while Wyatt showed he was still a severe force to be reckoned with in the Jr Sprint class. Eli brought home another top 5 to end his Jet Bowl Classic as Wyatt continued to showcase dominance in qualifying with a pair of high top 10 times both nights.

Onto the Clay Cup Nationals where everything that could happen, did happen, and both boys would be tested, emotionally and physically..

Wyatt came away with a runner up finish on his qualifying night. After some early struggle, Eli found his groove and made one of his signature charges as he climbed from dead last to sixth. Eli then brought home 12th on night two. Night two at Clay Cup also saw Wyatt put on quite the charge climbing from 9th to second. During the finale Wyatt made a fierce charge only to have it negated by his car failing to start as the race went back to green. As the car failed to refire on time, Wyatt was docked back to 8th. According to his father, Dubby, He came in after the main event furious, an emotion Wyatt doesn’t always display at the races.

But the best was yet to come for the brothers Bookout.

As they came home to finish the season the performance of the two kicked up. Both continued to qualify inside of the top ten on a consistent of basis.

Wyatt even scored his first Restricted quick time at Lemoore Raceway, not once, but twice. He kept pushing forward and rounding out his rookie campaign as the Lemoore Raceway Restricted Class Rookie of the year. His 21 features, with 11 at Lemoore, stood with a pair of top tens and a pair of quick times to boast. He did earn top-5’s on the season in the Jr. Sprint class. If his late season Performance is any indication, he will be a serious threat for wins next year.

As for Eli, he waited to break through all season long. Everyone knew he had what it takes to win, he’d long proven that, he just needed a little luck, and a break to fall his way. Small incidents, and minor mistakes took him out of contention for the King of California series, which early on, he was right into the thick of contention. But just when it looked to be his night, right when he was on the cusp of victory, it happened again.

The Budweiser Grand Prix points finale at Lemoore Raceway was going just the way the Bookout’s had hoped all year. As Eli raced out front of the field holding off some of the fastest drivers in the nation he seemed to be on his way to victory. But that’s when the wind came out of the sails as the engine started smoking. This would come to represent Bookout’s season as he was so close but some thing beyond his control lead to his dismantling.

However both Bookout’s have come to be known for their sportsmanship and personality. Through all the heart break and disappointment Eli Bookout took it all in stride, and never publicly showed his frustration or disappointment. His never say die, but kind, attitude is leading Eli Bookout to becoming a fan favorite, easily. In the end Eli raced 32 main events, took home 6 top 5’s, 19 top 10’s and a pair of quick times.

On the other hand, brother Wyatt has already established himself as the fan favorite, he is working on that animalistic race instinct. In 2018 he raced 24 times, with a top 5, a top 10, 2 quick times, and the title of Lemoore Raceway rookie of the year. Wyatt the Riot Bookout is a fan favorite for his cander and personality. He’s one of the most recognizable names at the races. His natural charm, and willingness to get in front of the crowd will take him a long way. Along with the speed he’s shown, the future is bright for little brother as well.

Both brothers will be back in the cockpit of the racecars in 2019. Big plans are In the works and you won’t want to miss the detail. The Bookout’s are foreboding the 34th Annual Tulsa Shootout but there are no lack of plans for the upcoming 2019 race season. Stay right here on Sprint Car Insider for all the latest breaking news and developments on the Bookouts as the 2019 season draws nearer.

Look for an official pre-season report in the coming days and weeks. 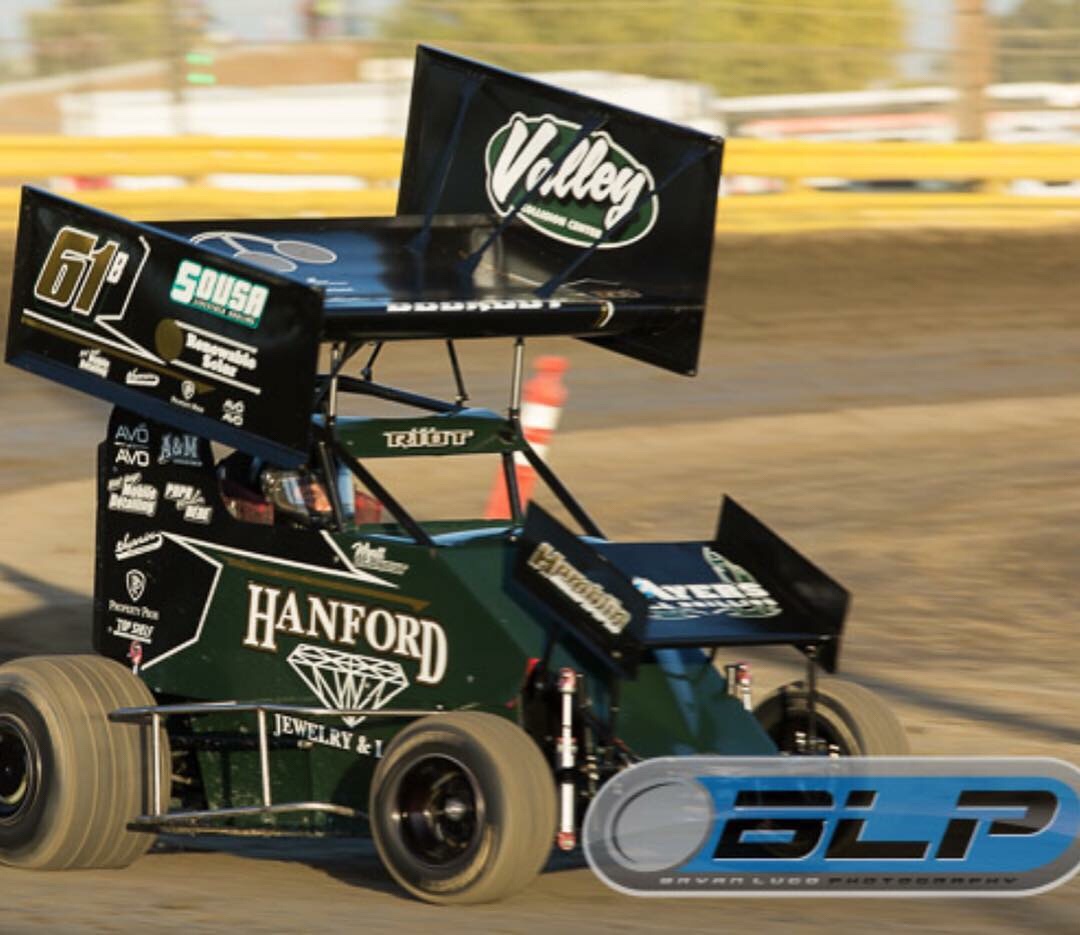 Lemoore Raceway Rookie of the Year

This article is proudly presented to you by Hanford Jewelry and Loan.

Founded in 1961 Hanford Jewelry and Loan is a proud family owned business showcasing the finest pieces of Jewelry in the southern San Jauquin valley and providing customers the best service, selection, and fair opportunity around. The numbers on the Bookout brothers proudly represent the year of the shops opening. A decision made solely by Eli Bookout. Make sure to stop by and say Hi whenever you’re in the Hanford area.