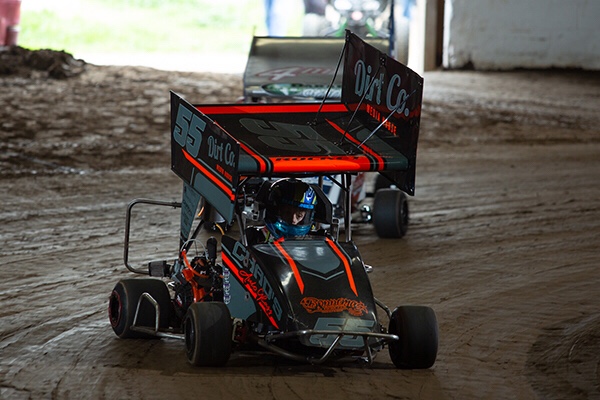 Barnes rolled to the green flag from the seventh position but that would be the only time he ran there. By the time the field came around the track to complete the first lap the race was history. Barnes stayed planted to bottom of the racetrack passing the entire field in just one lap.

He never looked back.

Barnes marched to the front and proceeded to not only check out, but leave a statement.

There was no question Barnes was the class of the field on Saturday at Race 10. By lap three he was already half a lap ahead of 2nd and turning blistering fast lap time 4/10ths of a second faster than the field. By lap four he was already into lapped traffic and blowing by them like he was on his way to the front again.

Barnes lapped well into the top 10 before the first caution of the race. Following the first caution the field had a chance to keep him in their sights but it wouldn’t last long. Once again Barnes stepped out to an enormous lead.

He clicked laps away one by one consistently and considerably faster than anyone on the racetrack without so much as a minor bobble or any indication he would relent his advantage.

One final opportunity arose for the field when the caution again waved after 19 laps in the books. With less than five laps remaining the lapped cars were put to the tail and the field was introduced to the sight of the 55 car within grasps. But that would be the only time.

The green flag waved on the final green, white, checkered of the 20 lap main event and Barnes checked out once more. After just a single lap

Barnes extended his margin to a full strait away advantage once again. He rounded turns three and four for the final time and drove to checkers making a statement, a bold statement.

After the results of last weekend, it was a welcomed result all the way around.

“I am on cloud nine right now,” said Nick Barnes, Jett’s father. “He went out there and got it done tonight, after that one I hope everyone realizes it’s him, he just loves racing, and after some of the big races we have gone to he’s figured out why consistency is more important than almost anything else.”

Nick was elated for his son to go out there and earn the kind of redemption he did with that performance. According to Barnes winning is the number one goal but winning with integrity is a lesson he does not take lightly on passing to his son. Nick wants Jett to win, but more importantly, to earn his wins.

Barnes unequivocally stands by that the incident from the previous weekend was that of an accident, and he would never cheat, much less his own son by earning wins on unfair performance rather than true skill and ability.

“It’s a class full of children, I would never put my child at an unfair advantage just to take away the potential for another child to come away victorious and enjoy that moment,” said Nick Barnes. “These children all want to win so bad, and the priceless enjoyment of being a parent, and seeing your child accomplish something so significant, is also a moment I would absolutely never take away from another parent.”

Now the goal on the forefront of team Barnes is for Red Bluff to allow them to race Box Stock in the upcoming West Coast Nationals. He would like to to see if he could become the first simultaneous champion of the event in history. According to Barnes the support for Barnes to be allowed to run the next class is shared by nearly everyone, and he is clearly capable, especially since he already races the class at other venues.

For team Barnes it’s about taking on the challenge and extending the possiyof progression. In the last year alone Barnes has progressed rapidly. The next level is calling.

Catch Jett Barnes wrapping up his Outlaw Kart season at Red Bluff and in just four short weeks he steps back into his TEN-J Chassis Jr Sprint for the first time since the Tulsa Shootout at the Budweiser Outlaw Nationals. For Jett Barnes 2019 is title time.

Will he get it done?