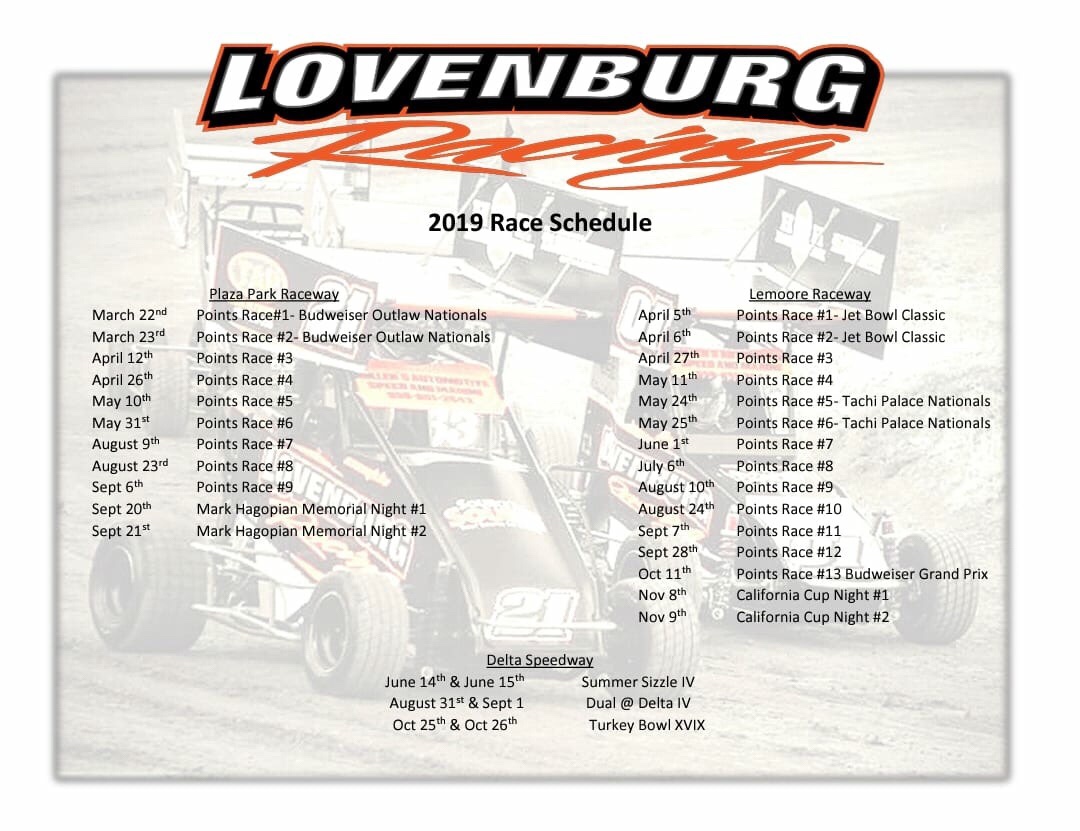 For the second year in a row, Lovenburg Racing will field two cars in the Jr Sprint Class at micro sprint race’s primarily across the state of California. Once again, Cash Lovenburg will be behind the wheel of number 21, PMP Chassis, and his younger brother, Ty, will hold down the controls of the 01t. Different in 2019 however, is that both cars will sustain MCR power under the hood. This season marks the 3rd for Cash, and the second for Ty. As they gain experience and track time their goals and expectations have evolved, and the team anticipates another year full of learning experiences, and unforgettable moments. 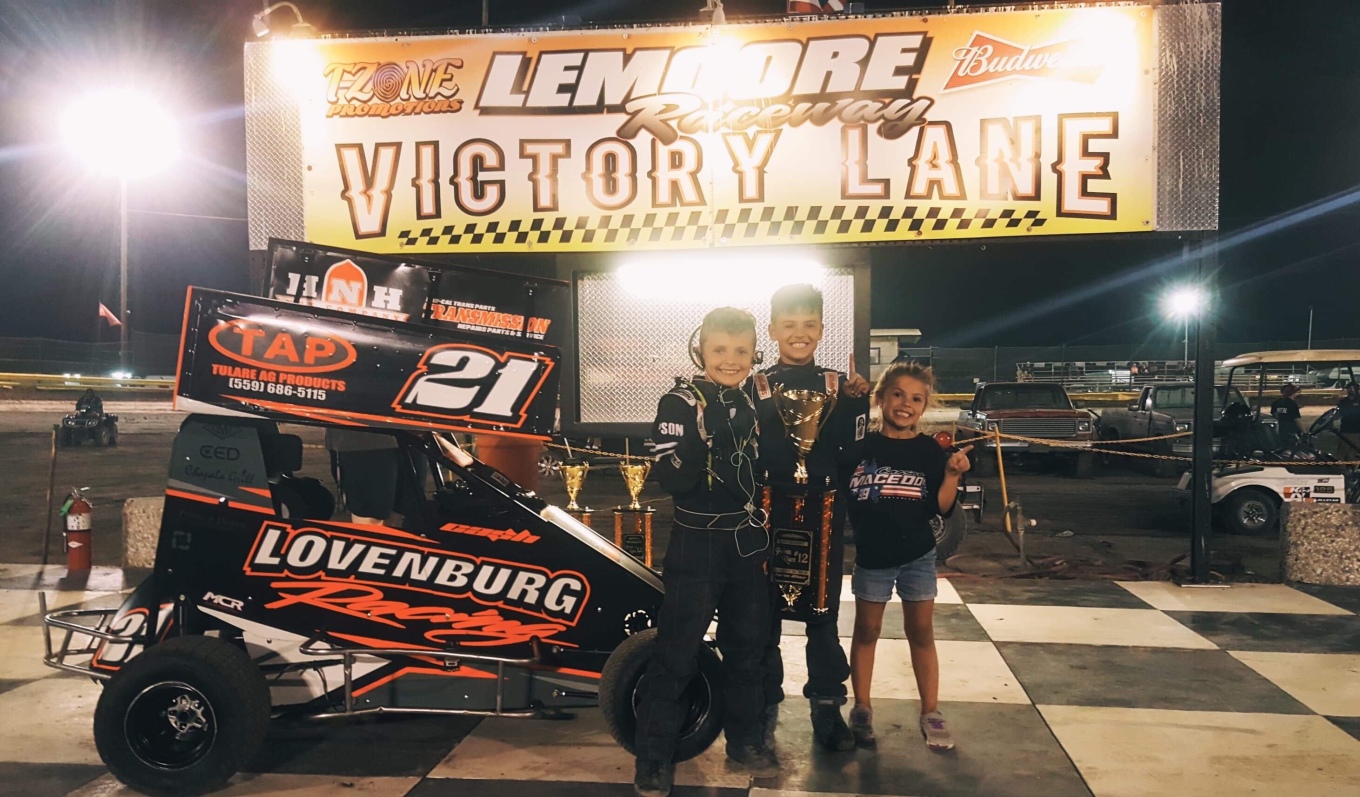 The team has welcomed some new partners for 2019. Lovenburg Racing hopes to share the journey, and enjoy the ride, while benefiting their new and old partners alike. In 2019 they intend to garner attention to the best of their abilities through social media recognition, word of mouth, live displays, and any means necessary. The Lovenburg family cannot thank their partners enough for giving Cash and Ty the opportunity to chase their dreams of maybe being the next Kyle Larson, or Carson Macedo, one day.

After a strong showing in 2018, Cash Lovenburg, comes into 2019 as a preeminent favorite to be in the thick of the Jr Sprint title contention at both Keller Auto Raceway and Lemoore Raceway. With that in mind, Keller and Lemoore stand to be priority number one for Lovenburg Racing. The team plans to be in attendance for all scheduled events with full focus on taking home race wins and earning Championships. 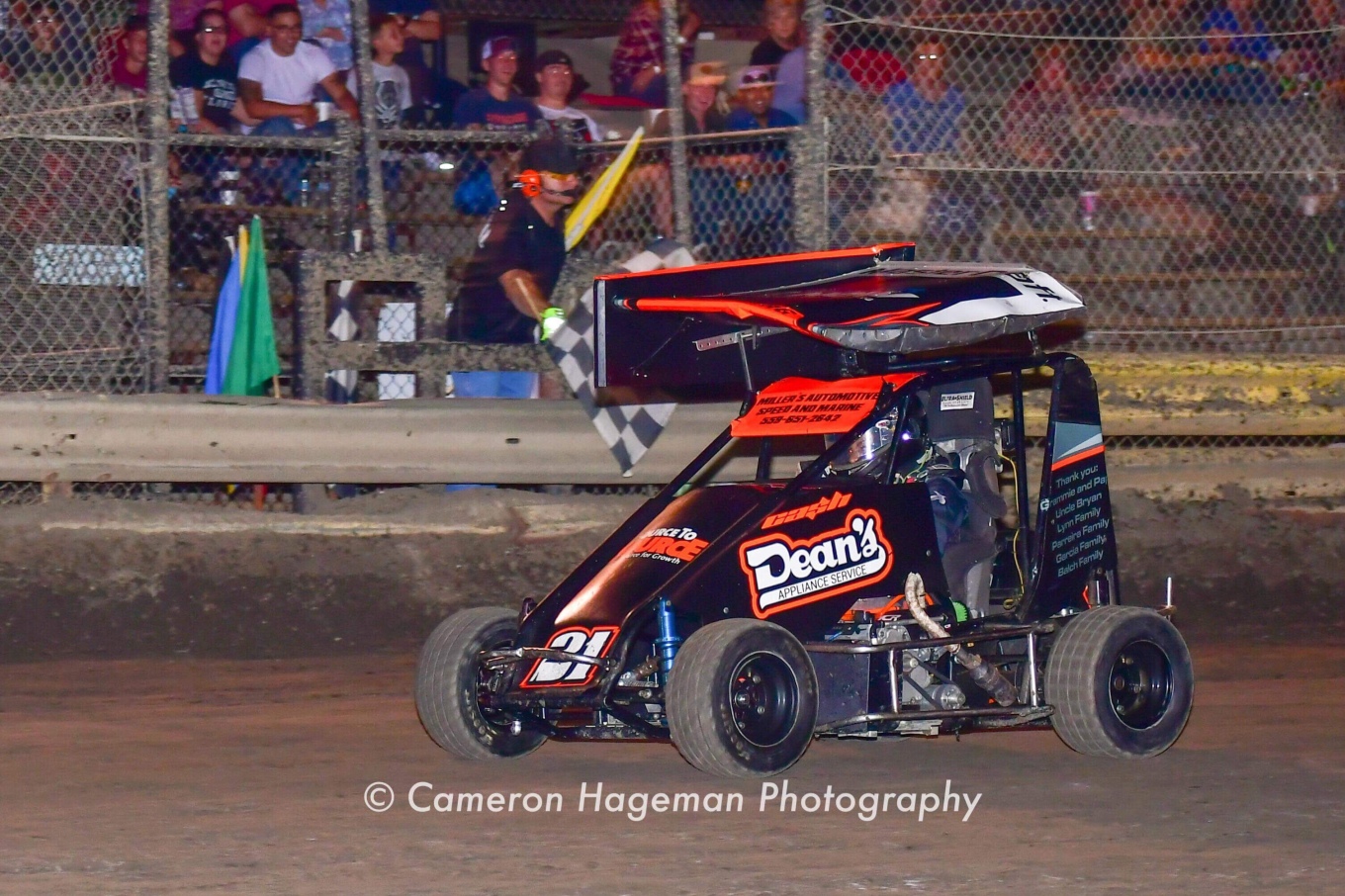 Sprinkle in eight to ten races at Delta Speedway, in Stockton, California, and the possibilities of running the Clay Cup at Deming Speedway in Washington, and the Tulsa Shootout, the Lovenburg’s have an entire year of racing mapped out right before them. While the evidence that Cash stands to be a contender is obvious based on last years results, overcoming the pressure of coming into the races with a different stature is something the team has yet to undertake, and will be another variable for the upcoming season.

“It’s all about carrying the momentum that we built last year,” said Brandon Lovenburg, their father. “At the end of the day it’s all about having fun, but we want to win as well and we’re ready to give it all we’ve got. But if our partners are happy, and the boys are having a good time, it’s all worth it.”

Being his third year, and coming into the season as a multi time winner, the expectations for Cash are written on the wall. His goals are to win races and pick up both Lemoore and Plaza’s Jr Sprint Championships, but younger brother Ty has some of his own goals as well. It’s far from impossible that the Lovenburg brothers may end up racing one another for the win.

Driving into his second full season Ty Lovenburg has shown some serious promise. According to the family Ty is the crazier of the two off the track and he could turn that on in the car at any time. The end of 2018 saw Ty land on the podium, and consistently keeping the leaders closer and closer to his sights at the end of 20 laps. Ty has shown the potential to spoil his brothers party and become a front runner as well.

The main goal for Ty is to gain more experience and steadily continue improving his performance. The expectations are in line with the goal. The team anticipates that he will continue to improve throughout the course of the season and may break through for that illustrious first win on top of more podium finishes.

The 2019 season is just about off and running for Cash and Ty Lovenburg. Lovenburg Racing can be seen racing at Keller Auto Raceway Plaza Park, and Lemoore Raceway on a weekly basis contending for the track titles. For Cash’s third year, and Ty’s second, the Jr Sprint Class is what they’re set to run. From March to October the team plans to run weekly picking up more valuable experience, podium finishes, race wins, and hopefully championships. The 2019 campaign proves to be the most competitive for the team yet.

Without the support from their sponsors Lovenburg Racing would not be what it is today. Thanks to the support from Entities and individuals far and wide Cash and Ty Lovenburg get to chase their dreams and venture out to tracks such as Delta and Deming Speedway. As the team drives into the future more fun and continued success remains on the mind of all involved.

Because it’s all about having fun but you know what they say?

Be sure to follow Lovenburg Racing on Social Media to keep up with Cash and Ty as they race through the season.

The entire team would like to extend their sincerest thanks to all the partners and people who have come on board to make this dream a reality: