Transitioning out of the Restricted Class, Bettencourt put up the best results of drivers making the jump out of restricted and up to stock. Not only did he put up the results but he drove with confidence and displayed the sense the he knew he could get the job done.

“He’s been really sick this week, I’m not even sure how he made it through that one,” said Shelley Bettencourt, Bryson’s mom, following the night one main. “He’s not even doing well enough to stay and watch the rest of the night, he’s gotta get rested up for tomorrow.”

Despite being as ill as he was Bettencourt still gave it an awe inspiring effort that paid off. It all started Friday night, night one of the Budweiser Outlaw Nationals and the first green flag since last November at Keller Auto Raceway. It didn’t take long for Bettencourt to knock the rust off as he laid down Sixth quick in the season opening qualifying session.

Then it was on to the heat race. The heat race is where Bettencourt laid down the big result. After eight laps against some of the toughest competition around, Bettencourt brought the 15B home with the win. It was there that eyes began to open that Bettencourt promises to be a serious contender as the year goes on.

The first 25 lap main event of the season was up next. Starting from the outside of row one the race was on. Nerves may have played a factor as the 15B lost some ground early but he got the wagon pushing again and came on strong. On lap 10 he was able to make the move around a fellow former restricted driver and he never looked back. Bettencourt ended night one of the Budweiser Outlaw Nationals on the podium with a solid third place finish.

However the weekend wasn’t over. He’d have to do it all over again the next night, and the Outlaw Nationals Championship was on the line.

This time around qualifying was much better. Bryson Bettencourt clocked in the 15B with third quick and set himself up nicely for the remainder of the evening. In the heat race things didn’t go quite as well as night one, with a sixth position, but after it was all over, the second 25 lap main event of the season loomed ahead.

Once again Bettencourt was a player in the main event. Despite being sick all week, he still had the stamina to run strong when it counted most. Although he narrowly missed the podium on night two he was able to fight for a top 5. At the conclusion of 25-laps the 15B of Bettencourt was scored officially with 4th on the night. This finish gives Bettencourt a ton of momentum heading into the next stretch of races.

A pair of top 5’s highlights the start of the season for Bryson Bettencourt. He’ll take that momentum with him and try to reach the top step of the podium next at the Jet Bowl Classic at Lemoore Raceway, in Lemoore, California, April 5-6. Bettencourt has a lot to hang his hat on considering how sick he was and how well he performed last weekend at the Outlaw Nationals. It’s a strong start to a long season. Look for the 15B to be running out front in the Super Stock 600 class in no time.

Bryson Bettencourt intends to race for the 2019 Super Stock Championship that runs between Keller Auto Raceway Plaza Park And Lemoore Raceway. His pair of top 5 finishes represent a strong boost of momentum to kick off 2019. Be sure to follow along with Sprint Car Insider for all the latest breaking news and developments on Bryson Bettencourt. Or follow along with his personal social media accounts to stay up to the minute with everything Bryson Bettencourt does leading up to and following the races. He’ll be back in action behind the wheel of the 15B in just two weeks at the Jetbowl Classic from Lemoore Raceway. 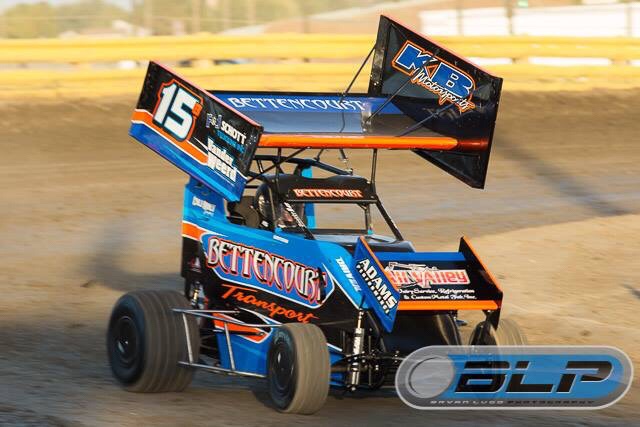 Bryson Bettencourt would like to cordially thank all of his sponsors for their continued support, and belief in the program.

OR – follow Bryson Bettencourt and the race team at:

Interested in obtaining Our services or becoming a marketing partner? We have options available for all levels of support. We strive to leverage the most effective means of adding value to our partners with unique but proven, practices.

Sprint Car Insider covers everything from Jr Sprints to the world of Outlaws SCI is your source for behind the scenes information, up to the minute coverage and racing entertainment.