On his way to the championship Lovenburg displayed pure domination and dominant consistency. His Keller Auto Raceway season is highlighted by four wins, ten podiums, and 11 out of 11 top five finishes. Perhaps most notably however, Lovenburg set the speed charts ablaze with seven quick-time performances. Only twice all season did Lovenburg turn in a qualifying time that was outside of the top two. 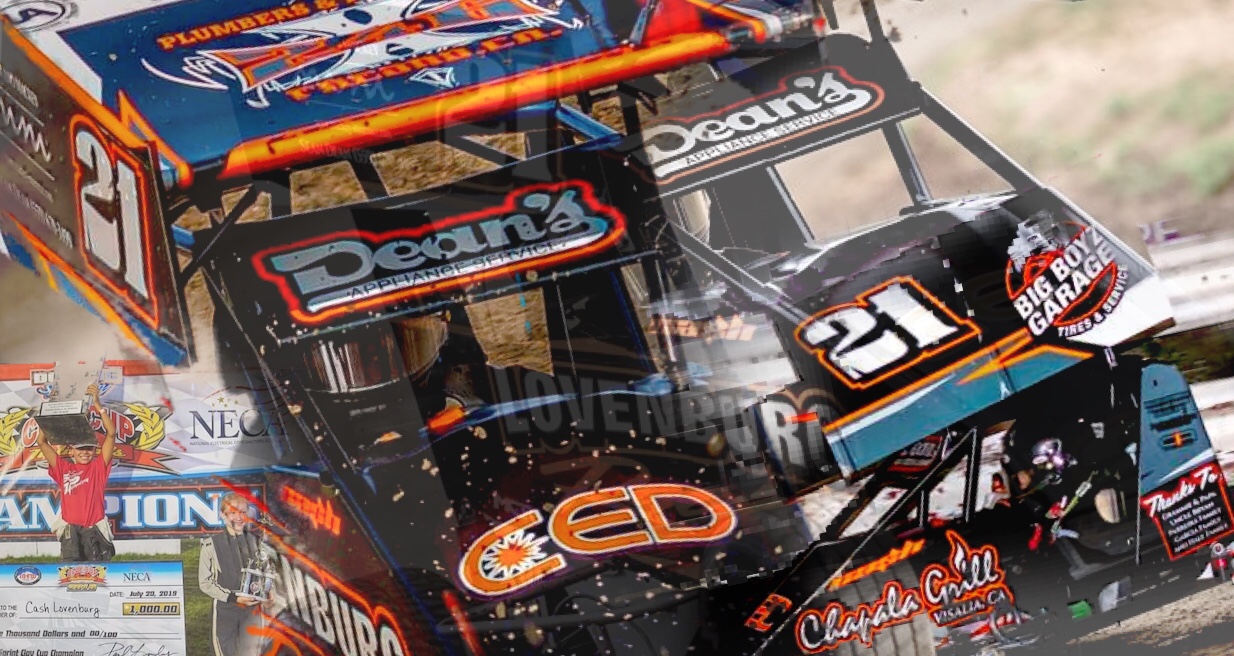 Lovenburg’s season was surrounded by Speed. After a disappointing first race in Stockton, Cash earned redemption early on opening night of the Outlaw Nationals. His first win of the season got the ball rolling and it never slowed down at Plaza all season. Although he came home with the runner up finish in the Outlaw National Finale he again dominated the speed charts. He topped qualifying in the first four races of the season. Matching his qualifying efforts, he split two wins, and two seconds, in main event results to start the season.

It wasn’t until round five that Lovenburg was dethroned from the seat of quick time. He qualified fourth in May 11 but in the end still came away with second when it counted most. When he returned to Plaza on May 31 for round six he found redemption by snagging his fifth quick time of the season as well as his third win. By this point in the season he had clearly established himself as the one to beat in the Jr Sprint class at Keller Auto Raceway.

He cemented that sentiment further by taking the biggest win of his career at the Clay Cup Nationals in July. On the heels of a last minute decision Lovenburg embarked on the great Pacific Northwest and the crown jewel event of Deming Speedway. Representing the young talent of his home region Lovenburg once again showed his stature as the one to beat all week. He seized the momentum and took home the title at the West’s Coast biggest Micro Sprint event. At the time It marked his 5th overall win of the season, his 15th podium in 19 races, and his 18th top-5 of the season to that point.

He brought that momentum home with him. After three months away from Keller Auto Raceway the track championship resumed on August 9th beginning the home stretch. Lovenburg began the home stretch right where he left off in qualifying earning another quick time. He followed that up with another podium finishing third at round seven. To that point in the season Cash had been the fastest driver on the track according to lap times in 35 out of 70 qualifications and heat races.

He found his way back to the winners circle for the fourth time at round eight. He completed his final night sweep of the season with the win and seventh quick time run of series. Leaving round eight Cash opened up an 86 point lead in the standings. In true champion form he built a cushion to land on in the case of any unknown variable down the stretch.

Cash’s season ended with a second at round nine, third at round ten, and season-low fourth to round out the season. But the damage was done. He had established himself as the number one guy and he touted that status all the way to the end.

Lovenburg finished the season with 929 total points, 81 points higher than second place 848. After adjustments were calculated the final tally gave Lovenburg 764 compared to 728 for second. After 11 races over seven months Cash Lovenburg was crowned the 2019 Keller Auto Raceway Jr Sprint Champion by 36 points.

Lovenburg can now add his name to the history books joining the likes of world class drivers such as Scelzi, Faccinto, and Macedo as Plaza Park Champions. Winning the Plaza Park title will forever be a cornerstone on Lovenburg’s resume. However as far as this season is concerned – its only half the goal.

One more title remains in the balance.

The championship at Lemoore Raceway is up for grabs this weekend with the Double points finale – Budweiser Grand Prix. Anything can happen with just 30 points separating the top two. One final battle remains. The winner may take all on Friday night.

Don’t miss a second of the action by following all the results and updates on Cash and Ty Lovenburg on Prodigy Race Promotions on Instagram and Facebook and with the official Driver Exclusive recaps right here on Sprint Car Insider. #PRParmy

Up next for Lovenburg Racing:

Visit our website – sprintcarInsider.co for or all of the updates on Cash Lovenburg as he continues his assault on the 2019 campaign.