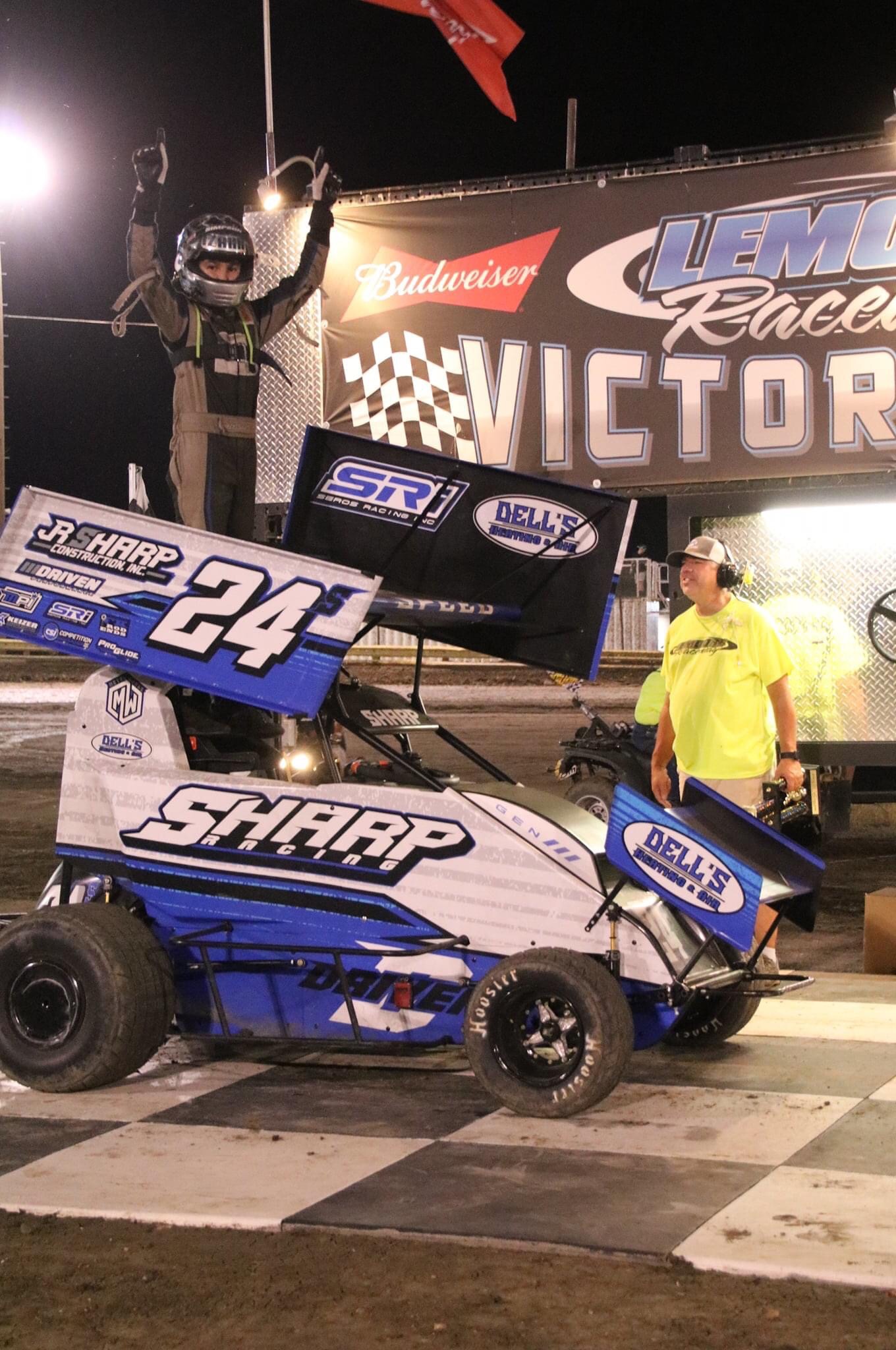 It was a landmark night for Speed Sharp.

Not only did he get his first victory of the season, his sixth top five, fourth podium, and third quick time, – he also made his Stock 600 debut. In His maiden voyage Sharp proved himself to be a prominent contender, and his improvement over the course of the night went on to pay dividends. 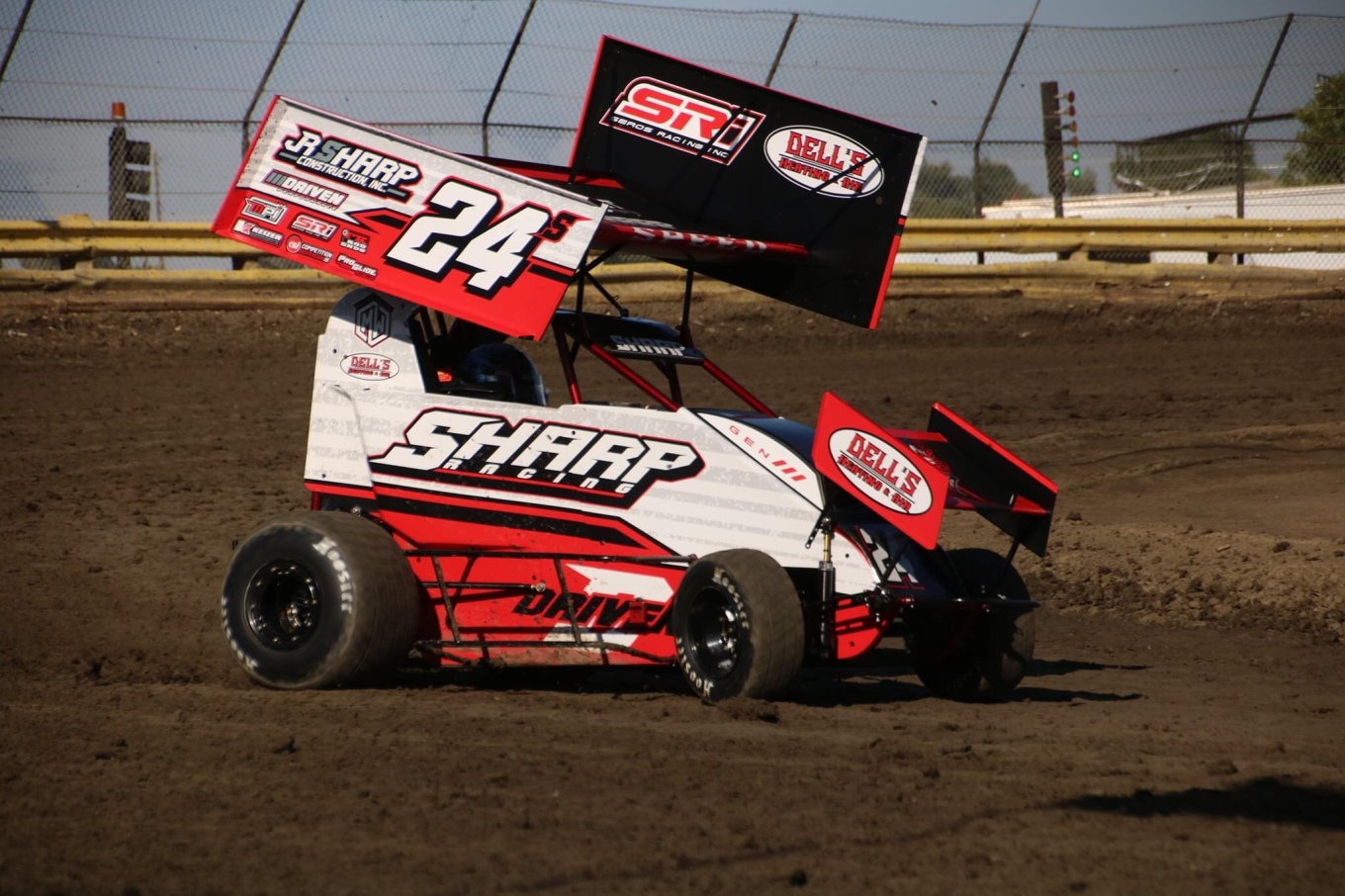 Sharp Racing spent the better part of last week assembling a second, red-number 24, to get back to the track for their first race in almost an entire month. It was evident Sharp was ready to rip. He kicked off his night by laying down his third QuickTime performance of the season in restricted. His 12.483 lap time topped the charts over the field and set him up for a good night of racing.

Going into the heat races he rolled out in the stock class first. A 14th place qualifying effort in stock tipped him a bit further back in the pack for heat Race action. None the less Sharp showed improvement as he came home with 6th turning in the 5th fastest overall lap of the race. It was a step in the right direction but far from what was to come. 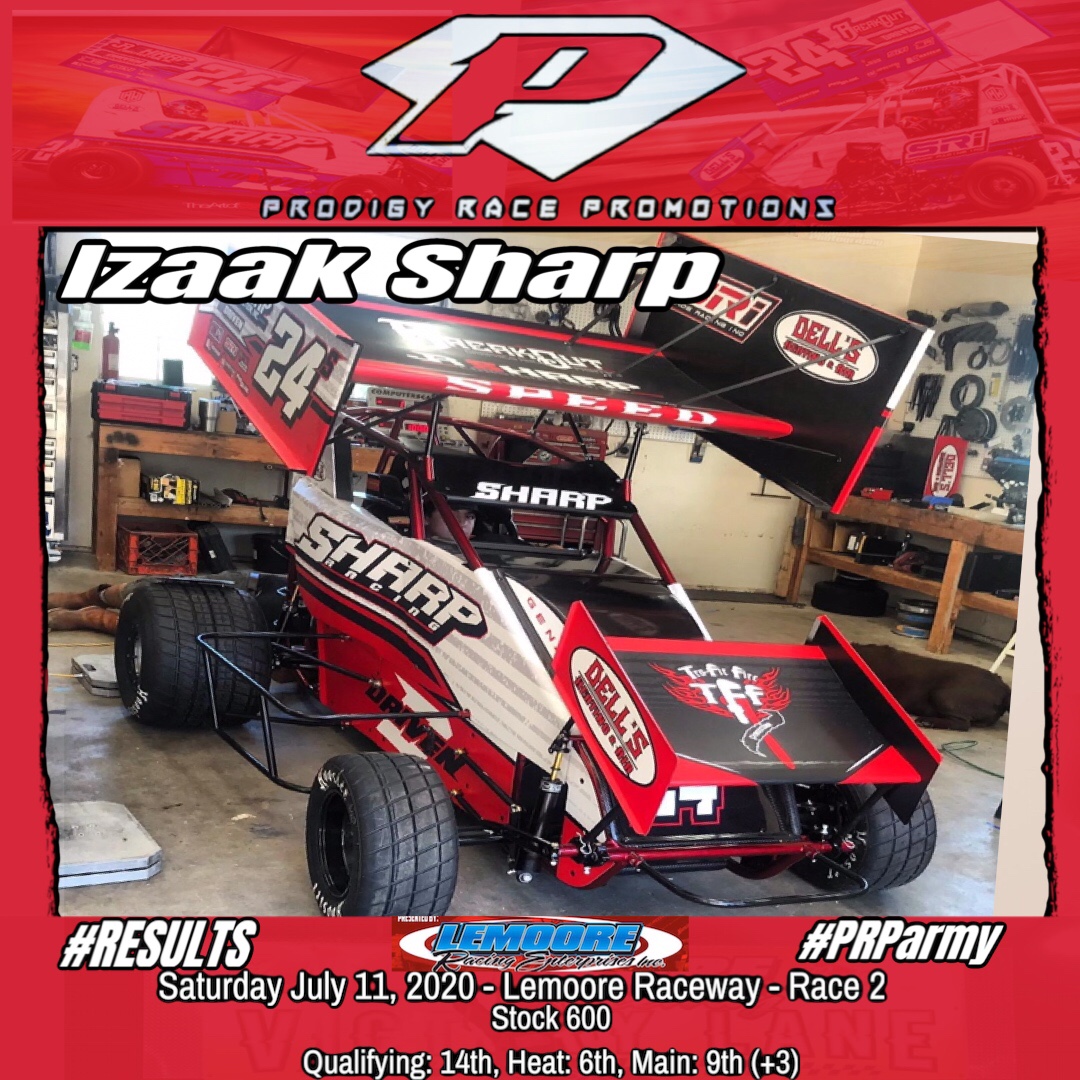 Moving into the restricted heats the front runner on the night started heat one outside of the second row. Tough early track conditions were not conducive to passing but fresh out of the stock class car Sharp used his new found experience to his benefit by surging to second and crossing the checkered flag a mere .067 behind.

The sun set on Lemoore Raceway and the lights came on for a night Izaak Sharp will not soon forget. 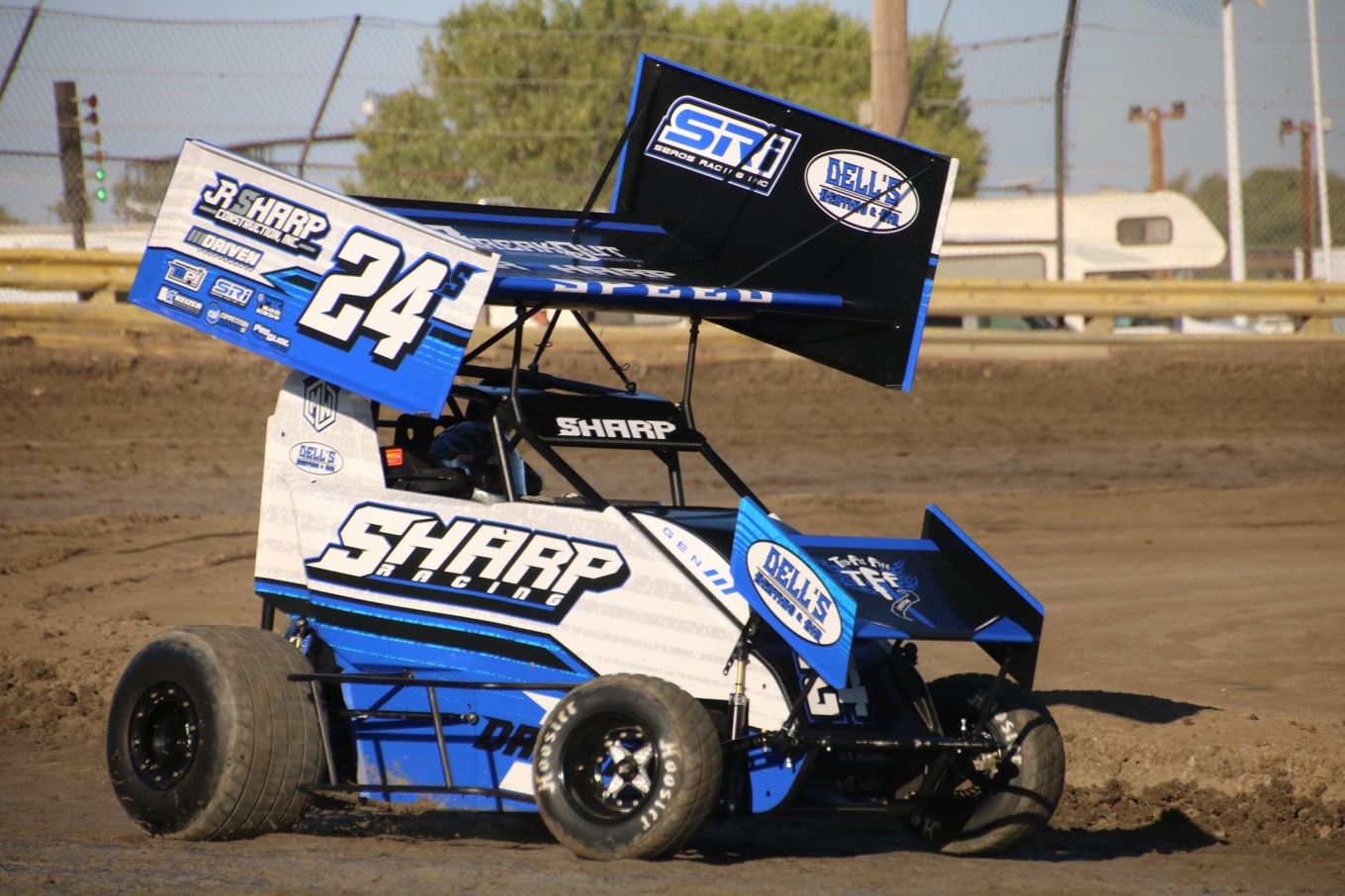 Main event time rolled around and Sharp took to the track for his first career stock 600 25-lap main event. His first go-around at the next level, with plenty of well touted contenders all around him. As the green flag dropped there would be no driver capable of intimidating the 24. He sliced and diced with the best of them, like a seasoned veteran.

Izaak managed to charge Up to 7th when he Got hit on his front tire and it spun his steering wheel all the way around.

“When he straightened the wheel he thought he was broke because he was still going right,” Izaaks father John said. “He did figure it out. But never caused a caution, So by the time he fixed it he was half a lap out.”

Despite his troubles, Sharp put on a valiant charge. He ran down and passed another seven or eight cars en route to a ninth place finish in his first attempt. On paper it says he made up three spots, but he made a night out of passing cars and running hard.

The most impressive feat for Sharp however may have been easily overlooked at first. According to the lap sheets, Izaak Sharp was the second fastest driver on the track in that main event. His lap time on lap seven bested every driver in the field but one, and again, it was his first time racing the stock division. It’s fair to say the stock class has a new contender on the horizon. 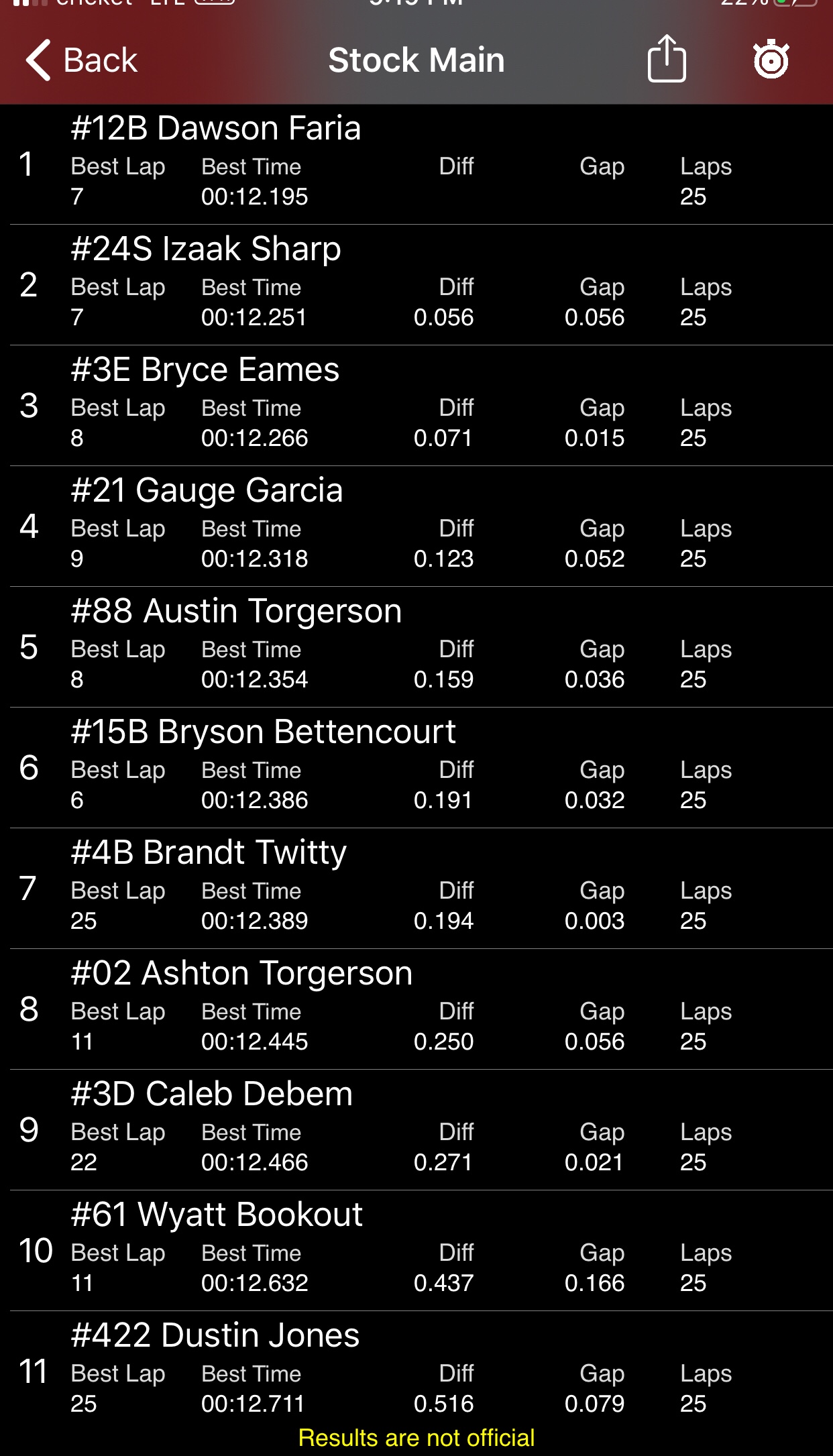 While his stock results didn’t immediately jump off on paper, what it did to his confidence spoke volumes. Coming into Saturday night Sharp was on the verge of victory. He’d been knocking on the door, with runner up finishes, and five strait top fives, all that was left was to seal the deal.

He did it on Saturday night.

In his final feature of the weekend, the Restricted 600 main, Izaak Sharp was undoubtedly the top dog this go around. He dominated the 20 lap feature from the pole. He showed the Restricted field around Lemoore Raceway with a new sense of esteem. His confidence exuded that race car as he kept the hammer down til the finish logging the fastest lap of the race on lap 19. He was pushin from start to finish. 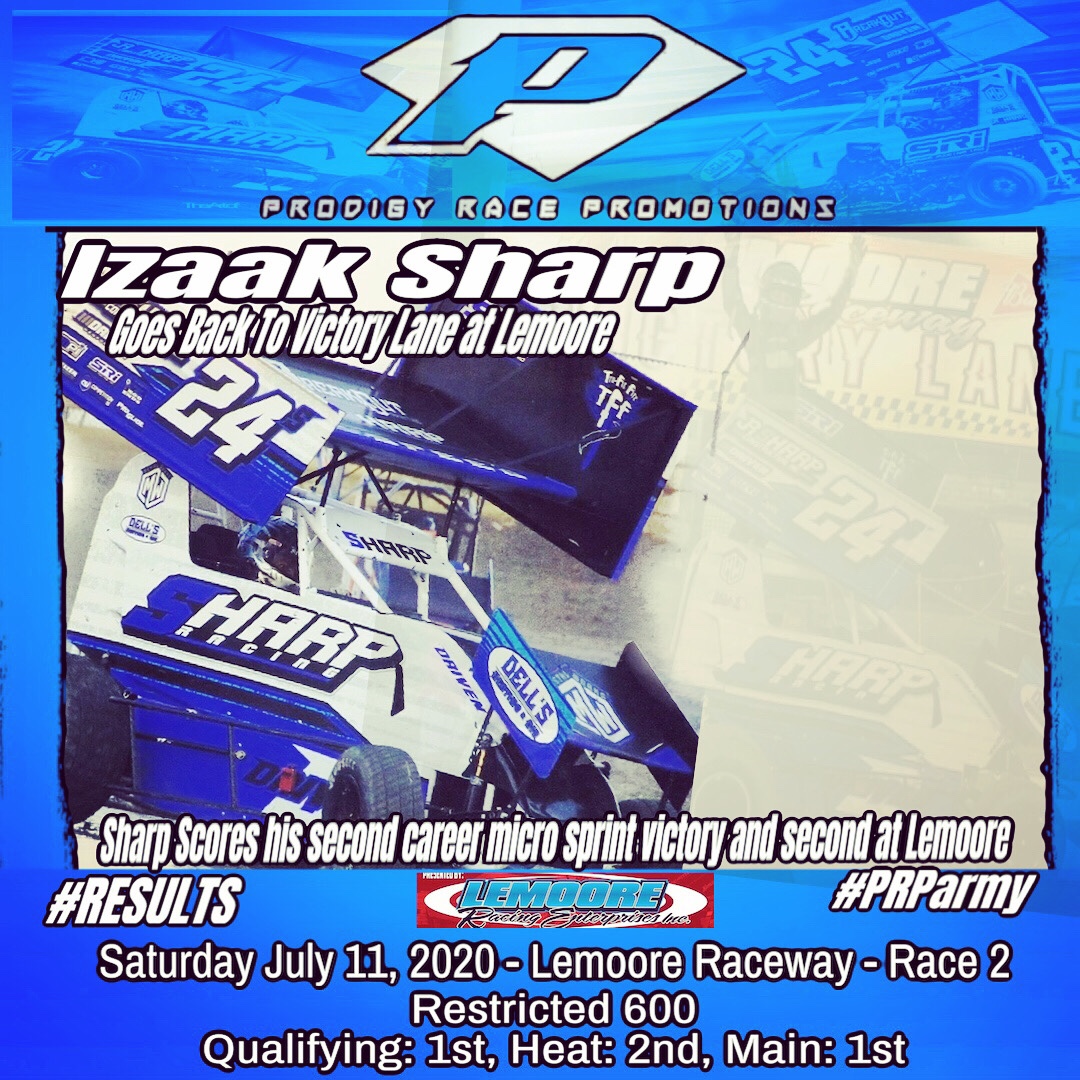 It’s safe to say Sharp is showing the micro sprint world where the nickname Speed Sharp comes from. He’s been blistering fast every time he’s unloaded in 2020. Following Saturday night he

now sits at six consecutive top fives and a win to go along with it in restricted. He’s seven for seven in top tens after running ninth in his stock debut. In seven races he’s stood on the podium four times, won two heat races and topped the charts in qualifying in nearly half of his attempts.

The trajectory is strait up for Izaak Sharp this season and it’s only getting started. Winning is addictive. Now that Speed Sharp has had that taste in his mouth once again it may become difficult to get him to let it go.

Is this the start of a streak, a “Speed Streak,” If you will? 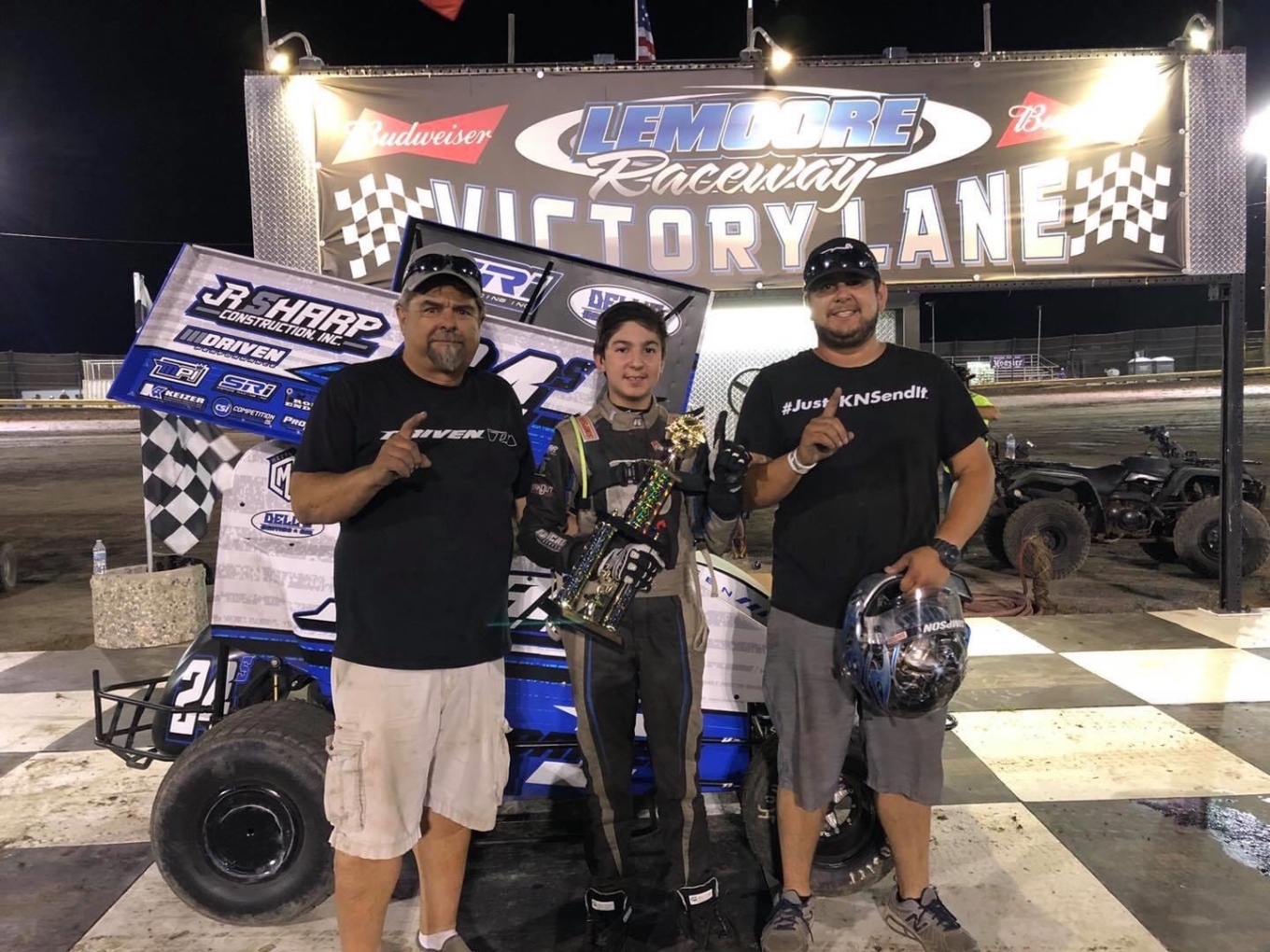 Find out by staying right here on Prodigy Race Promotions on Sprint Car Insider and Don’t miss a second of the action as “Speed” Sharp and his quest for win number two right here. #PRParmy

Izaak Sharp and everyone at Sharp Racing would like to cordially extend their sincerest thanks to all of the partners involved:

Up next for Sharp Racing:

Be sure to follow Izaak “Speed” Sharp on Social

Visit our website – sprintcarInsider.co for or all of the updates on Izaak Sharp as he continues his assault on the 2020 campaign.